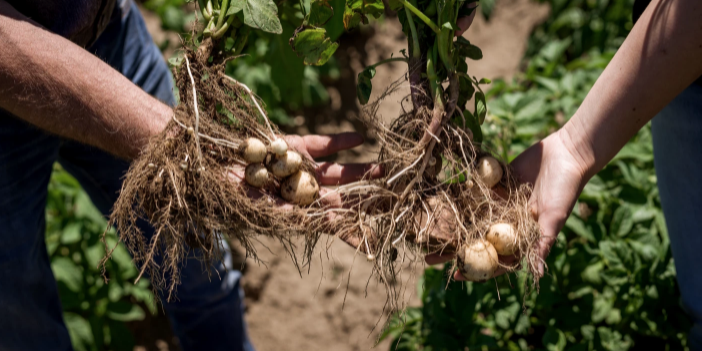 Windiana Farms is a family-owned farm in southern Alberta, committed to growing quality crops – potatoes, cereals and forage. It was started by Mike & Cathy Wind in 1989 when Mike left a successful partnership to venture out on his own. Starting with a small land base and potato contract, through much hard work and many blessings, the farm has grown in size and added two sons, Jeremy and Kevin, as partners.

For the last few years, Jeremy has been following ACF-SR and has dedicated a lot of time to learn about the benefits of its function-focused bacteria. It seems as though every year he’s used the bacteria, there are new developments and exciting results.

It started with a field of hay. Jeremy thought this was a great chance to run a trial late in the growing season. He noticed a massive increase in tonnage, compared to the control side of the field.

In year two, he decided to treat more acres and more crops. After learning about the benefits ACF could have on alkali patches, he decided this was something he wanted to focus on. He had one area that historically never grew anything due to the soil alkalinity. After applying ACF heavily on this area, he was blown away that he grew a potato crop.

The latest development with ACF was in 2020. Jeremy noticed half of his potatoes in one of his storage facilities had much more spoilage than the other half. According to Jeremy, it was a clear line in the storage facility. He had to go back to his office to find out the reason for this.

The only difference between the two sides of storage, was that ACF was applied to half of the field.

“We’ve tried ACF-SR on a variety of crops this season with a great amount of success. We applied ACF on export Timothy and found that regrowth in between cuts was faster and more vigorous.

Working with AdvancedAg has been a great relationship, they are always eager to work with us to help us improve our production with innovative products.”

Producers like Jeremy who take the time to educate themselves, run trials and think outside of the box are the ones who are likely to have healthy soils for generations to come.

We are all excited to see what benefits he finds in the near future.

In Reaction to the Canadian Government’s Emmision Targets and its Impact on Farmers
August 18, 2022